DRIVING LICENSE
If you hold a driving licence issued in Malta or in any EU member state, you may drive in all EU countries, provided that your licence is valid and that you only drive the category of vehicles that you are entitled to.

To drive in a non-EU country that is party to the Geneva Convention on Road Traffic, it is advisable that you obtain an International Driving Permit. This permit is issued for one year, on presentation of a valid licence issued either in Malta or in an EU member state.

You will be required to produce: a completed application form (DRV.06), your identity card or passport; two passport-sized photographs; a medical certificate (DRV.08) if you are over 70 years of age. The permit will be issued immediately against a fee of Lm12.50 ( 29.11).

MOTOR INSURANCE
Your car insurance policy will automatically provide the minimum cover (third party liability) required by law in the EU. This also applies to Iceland, Norway and Switzerland. If you have comprehensive insurance at home, check that the cover extends to travelling in other countries. You may also want to consider vehicle breakdown Assistance such as the European Breakdown Service provided by RMF.

GREEN CARDS
A green card is not obligatory when travelling in the EU but it serves as internationally recognised proof of insurance and it makes it easier to claim compensation. If you do not take a green card with you, you should carry your certificate of insurance. The green card system currently covers 44 countries. Your insurer can give you a European accident statement form, a standard document that makes it easier to make a declaration on the spot if you have an accident in another country.

CAR FERRIES
Virtu Ferries operates a fast ferry service for vehicles and passengers between Malta and Sicily. All trips leave and arrive from the Sea Passenger Terminal, Pinto Wharf, Valletta, Malta and Pozzallo Port in Sicily. The trip takes approximately 90 minutes and crossings vary according to season.

INFORMATION REQUIREMENTS
In accordance with the International Directive SOLAS, when you book your ticket at a travel agent, you must submit the following details: Name and Surname, Sex, Age, Type and Registration Number of the vehicle. It would be helpful to declare any disability. For non-citizens/residents of the EU, the following details are also required: Nationality, Passport Number and Expiry date, Date of Birth, and Place of Birth.

DRIVING SAFELY
In all EU countries, it is compulsory to wear seatbelts in both the front and back of the car. Child car seats have to be used for children travelling in cars.

Remember to drive on the left side of the road in Cyprus, Ireland and the United Kingdom. In some countries, such as Belgium, France, the Netherlands and Portugal, you normally have to give way to traffic coming from your right. Using a mobile phone while driving greatly increases the risk of a fatal accident and it is either explicitly or implicitly forbidden in all EU countries. In some countries, the use of hands-free devices is tolerated.

Although in the majority of EU countries the maximum permitted blood alcohol level is 0.5mg/ml, in others it varies between 0.2 mg/ml and 0.8 mg/ml (0.9mg/ml in Cyprus) and some countries do not allow any alcohol in the blood while driving.

SPEED LIMITS
The speed limit on motorways is generally 110, 120 or 130 km/h and the limit in built-up areas is 50 or 60 km/h. Keep an eye on the signs to make sure of the exact limits and any special conditions that apply. Opposite table giving general maximum speed limits for cars in January 2006. In some countries limits are reduced in bad weather conditions or for newly qualified drivers.

Speed limits for cars in km/h:

TOLLS
There are toll roads in many countries including Austria, the Czech Republic, France, Greece, Hungary, Ireland, Italy, Poland, Portugal, Slovakia, Spain and the United Kingdom. Visitors using Austrian motorways and ‘A’ roads must possess and display a toll label or vignette on their vehicle. These can be bought at all major border crossings into Austria and at larger petrol stations. The Czech Republic, Hungary and Slovakia have a similar system of a sticker affixed to the windscreen.

TRAFFIC SIGNS
In Western Europe the traffic signs are well standardised, although there are still some countryspecific exceptions in many countries. Triangular shapes (white or yellow background) are used in warning signs. The prohibition signs in Europe are round with a red border. Informative and various other secondary signs are of rectangular shape.

For danger and prohibit signs, white or yellow is used. Most countries use white with a few exceptions like Sweden, Finland, Iceland and Poland, for instance, where yellow was chosen. Signposting road numbers differs greatly. Only the European route number, if signposted, will always be placed in white letters on a green rectangle.

European countries use the metric system on road signs with the exception of the UK, where distances are still indicated in miles. 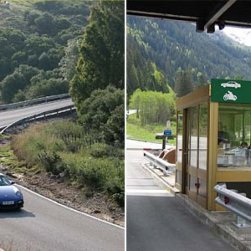